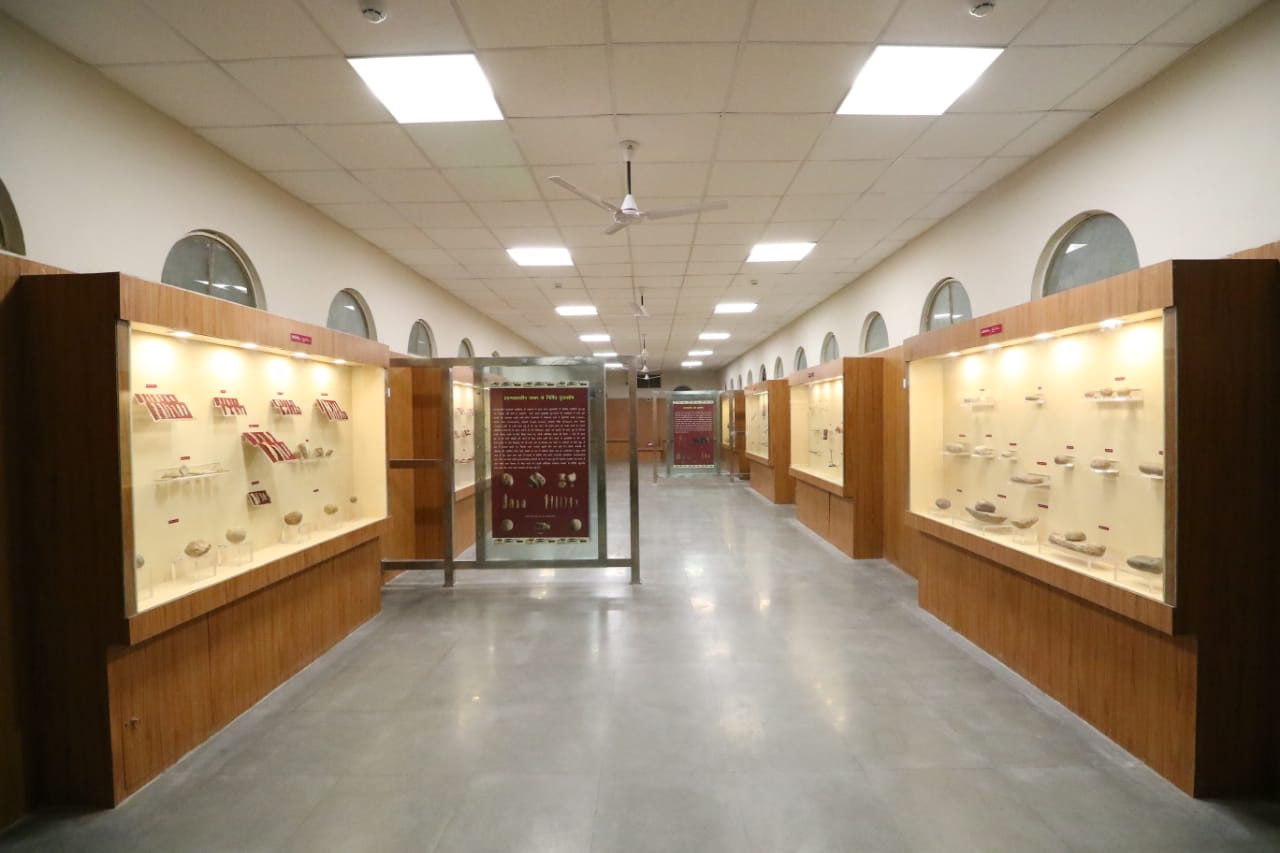 Archaeological Museum Kalibangan is located about 8 kms south from the Tehsil headquarter Pilibangan in district Hanumangad. After upgradation and reorganization, the museum was reopened on the occasion of World Museum Day i.e. 18th May 2017. The Museum was established in 1985 with the objectives to display the antiquities recovered from the excavations at Kalibangan carried out nine field seasons (1961-69) under the directions of Prof. B. B. Lal, Shri B. K. Thapar and Shri J. P. Joshi all are the former Director Generals of Archaeological Survey of India (ASI). The cultural assemblage and antiquities of Kalibangan is divided into two phases i.e. Early Harappan and Mature Harappan culture. These objects & antiquities-includes terracotta, stone objects, metal objects, potteries, bricks and weight and measures, etc. are displayed in three galleries of the museum. 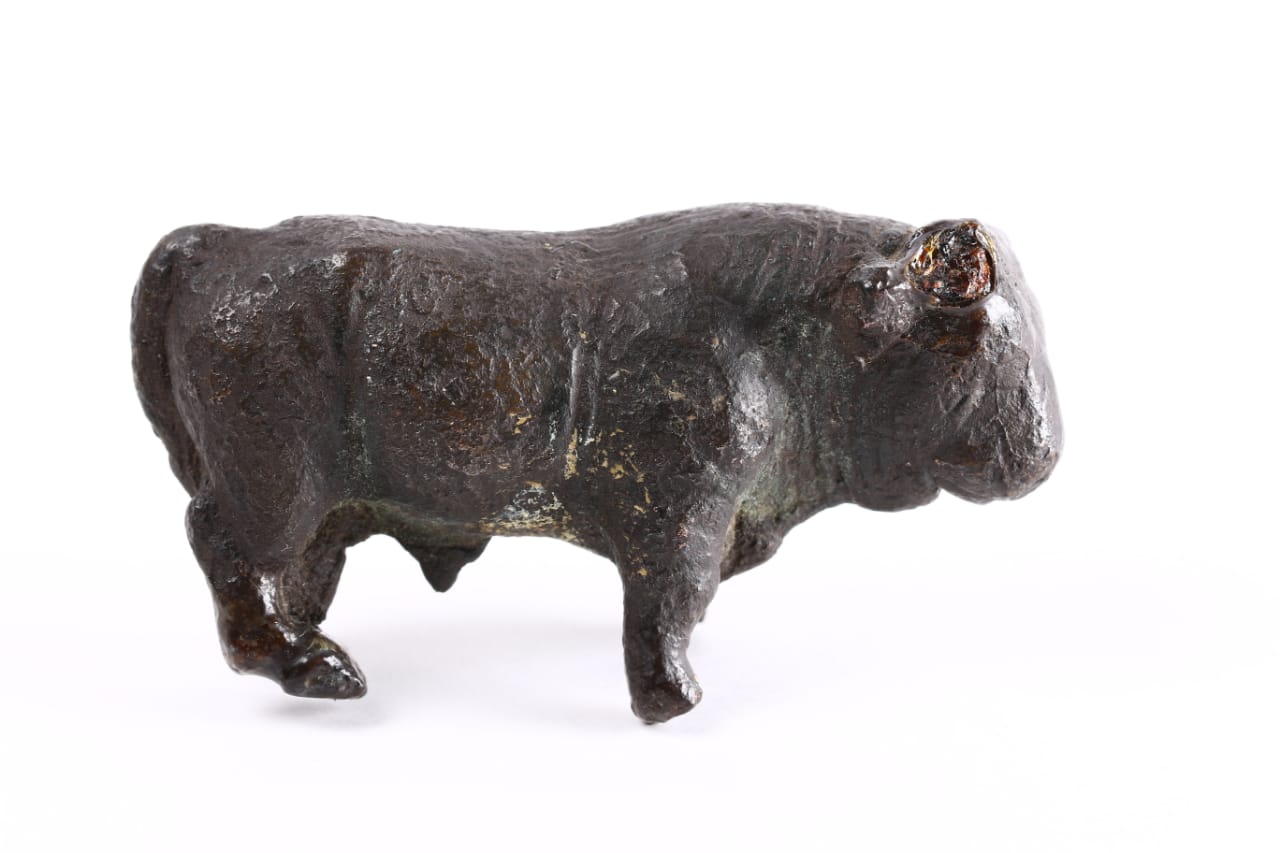 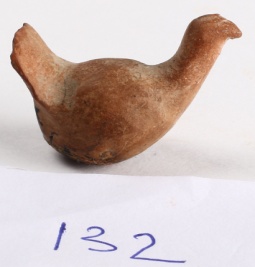 This gallery contains the object sad materials of Mature Harappan phase. The main exhibits in this gallery are potsherds of vases, bowl dish on stand, beakers and goblets, miniature pots and different type’s lid and perforated vessels, etc. These potsherds are well decorated with floral and geometric designs in black colour and engraved with graffiti marks. Among the most favorite designs are fish and fun, horizontal and vertical lines, diamond and chess desgin, triangular and square patterns, criss-cross marks, dots and circle, various type of leaves, animal motif and Harappan letters. The painted and graffiti marked potsherds (Harappan sign) are another attraction of the gallery. Besides, a large earthen storage jar displayed in the center of gallery is attraction for the visitors. 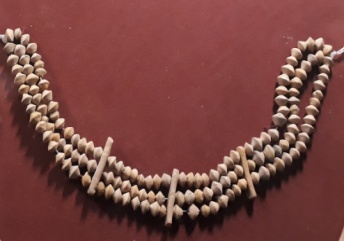 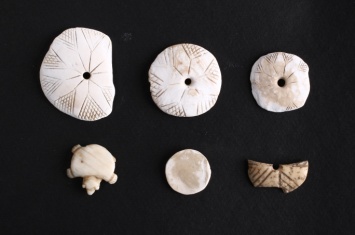 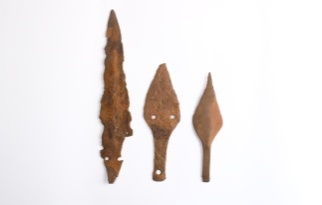 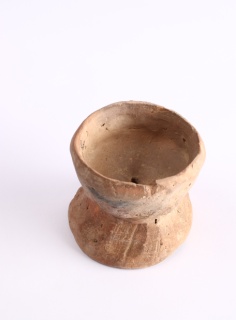 The unique identity of this gallery are stone made big size saddle-querns, door-devices, chert blade and beads of semi precious stones (agate, Carnelian, Faience, Jasper, Steatite and Lapis Lazuli). Terracotta damru shape hour glass, pans, plumb bob, measuring scale, necklace and shell button also worth to see it. Apart from the above objects, the replica of a Skeletal remains found in excavation (KLB-8) is also displayed in the courtyard of the Museum which provide an opportunity to the visitors have a glance of past burial practices. 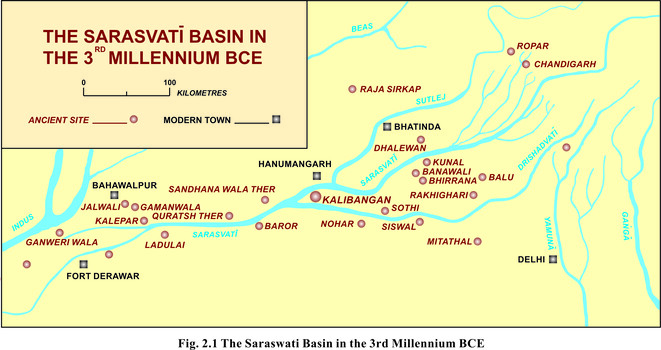 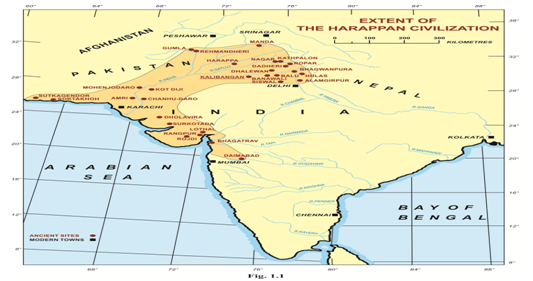 First time Indus Civilization came into light in 1921-1922 after the excavations at Harappa (100 km. from south west of Lahore at Ravi river in the Mintogomri district of Pakistan) & Mohenjo-daro (which means "mound of the dead") (in the Larkana district of Sindh region of Pakistan) by the field officer Daya Ram Sahni and R D Banerji, under the guidance of Sir John Marshall.

After the partition of India and Pakistan in 1947, the major Harappan sites are felt in Pakisthan. Then Indian Archaeologist has started a village to village survey from state of Jammu & Kashmir, Punjab, Haryana, Rajasthan for the search new Harappan sites. Due course of exploration, Kalibangan was considered to be the first important Harappan settlement discovered by Shri Amlanand Ghosh in the year 1952. 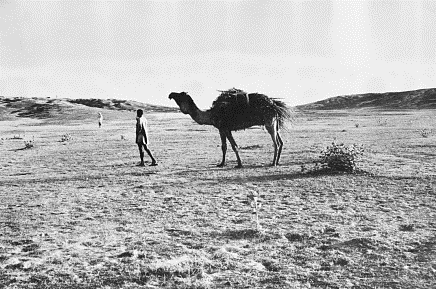 Past Site of Early Harappan

The ancient site Kalibngan was situated on the left bank of river Ghaggar now dried (Ancient Saraswati) up which was first highlighted by Shri Amlanand Ghosh in 1952. After 9 years this site was excavated by Prof B.B. Lal, late Shri B. K. Thapar and Shri J.P.Joshi in nine season from 1961-69. The objective of the excavation was to know the ancient history and archaeological remains of the ancient site Kalibangan.

The excavation revealed antiquities of two cultures i.e. Early Harappan Culture (Circa 3000-2700 BCE) and Mature Harappan Culture (Circa 2600-1900 BCE). The ancient site comprises three mounds the largest one is in the middle (KLB-2, Mature Harappan) smaller is in the West (KLB-1, Early Harappan) and the smallest is in the East (KLB-3, Mature Harappan). Apart from these three mounds another mound is in the South-West of citadel i.e. mound of Cemetery (KLB-8 Burial). During the excavation three types of burials have been found as Rectangular or Oval Grave Pits; Pot Burials in a Circular Pit and Rectangular or Oval Grave Pits containing only pottery and other funerary objects. The last two type burials found without skeletal remains. 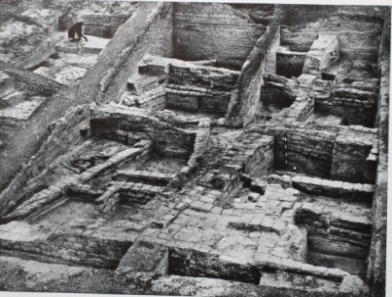 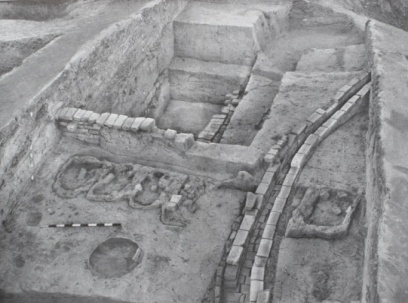 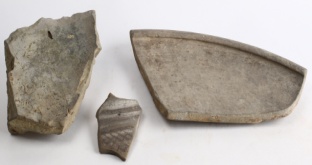 The Early Harappan pottery is identified by its distinctive traits which was prepared on fast wheel and well fired on high temperatures. The pottery of this period is classified in six fabrics, labeled A to F. Fabric A is light and thin in section and red to pinkish in colour, most of the vessels were painted in black and combined at times with white colour on the dull red surface. Mostly design are horizontal bands, triangles, vertical enclosing chain, four petalled flowers, fish, duck, deer, and bull etc.

Fabric B type of vessels were carefully potted on the wheel and they were treated with a red slip up to shoulder, the slipped area being further diversified by black painted horizontal bands of varying thickness. Over this rusticated surface having naturalistic designs, floral, bull, duck and stag, etc. were painted in black. Fabric C earthen wares were marked by a finer textured past and all over smooth slipped surface in shades of red and purple red. This deluxe ware having black colour horizontal bands or loops or crisscross and wavy verticals designs etc. Fabric D is characterized by vessels with thick sturdy section and slipped red surface. The basins with a ring base were decorated internally on the sides with sharp ridged varying patterns often ordered by wavy lines and on the outsides with single or multiple impressions or rows of cord impressions, etc. Fabric E comprised vessels with a buff or reddish buff slipped. Common shapes including large and medium sized jars with rounded rim. This fabric ware also decorated with black colour and white pigment like as cock, butterfly and wavy verticals etc. Fabric F is a grey coloured pottery which is painted with white colour and main shapes are dish on stand, bowls and vases, etc. 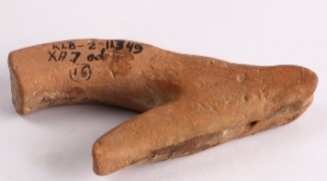 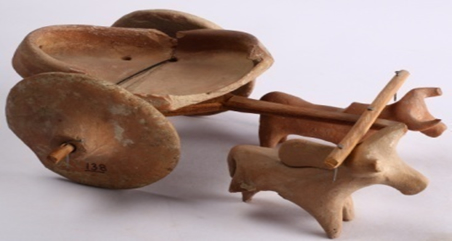 An outstanding discovery of early Harappan period (KLB-1) was a ploughed field showing a cross pattern of furrows, located to the South-East of the settlement. This is perhaps the earliest ploughed field ever discovered in excavation anywhere in the world. Agriculture was a major occupation and people were growing double crops in one season.

The terracotta plough indicates the type of plough share used by the Harappan at Kalibangan. The discovery of ploughed field in the early Harappan levels, which happens to be very early evidence of practicing agriculture in the world. The availability of gypsum suggest, use of for reducing salinity and perhaps reclaim saline lands. Wheat, barley, rice, pisum (matar) and horse gram (channa) was grown and eaten. Hunting and fishing was also practiced as fish hooks of small and big sizes are available. It is assumed that perhaps Harappan agriculture was largely depended on monsoon. 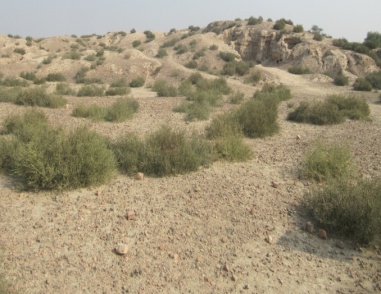 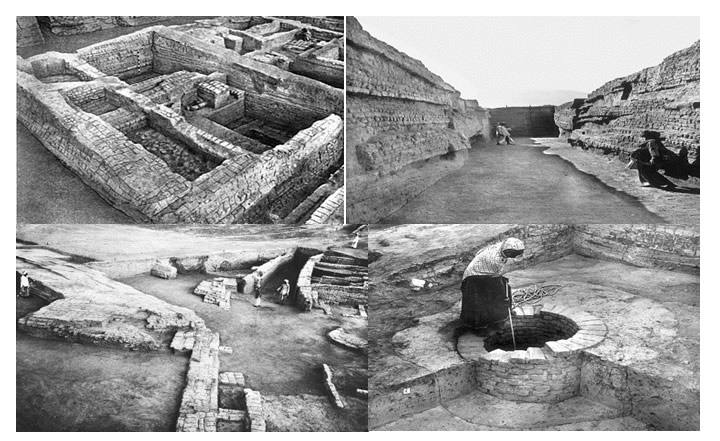 After a break of about hundred years the site was re-occupied by Mature Harappan Culture people. The settlement of KLB-1 occupation was deserted on account of an earthquake which may be occurred around 2700 BCE. But this period the city layout changed and separated into two distinct parts- a Citadel on the West and a lower town on the East. The citadel complex situated a top on the remains of the preceding period was a fortified parallelogram measuring 240x120 meter and consisting of two equal but separately patterned parts. The southern half of the citadel contained some five to six massive platforms some of which seem to have been used for religious of ritual purposes. A platform was found over which a series of seven fire altars, a bathing pavement and a well. The lower Town was also fortified with mud-brick wall and a gridiron plan of streets running North-South and East-West with arterial lanes. This settlement was survived about 700 years without changing of planning. 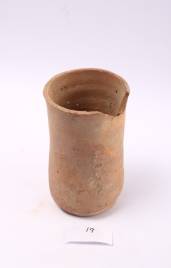 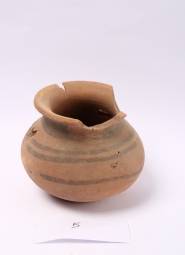 The Mature Harappan pottery is similar from other Harappan site in fabric, texture and typology, which were made on fast wheel and fired on high temperature (approx. 930° degree). The main shapes are S-shaped jar, dish-on-stand, different type of lids, perforated pottery, large storage jars, handi, bowls with outturned rim, goblets and beakers. The daily need pottery shows a rich variety of paintings made in black or brown on red slipped surface includes geometric and naturalistic designs. The geometric designs consists of circles, concentric circles, intersecting circles, dots, horizontal lines, arches triangles and lozenges etc. Naturalistic designs comprising of flowers, leaves, banana leaves, petal leaves, peacock and stags, etc. are decorated on the exterior surface either singly or in combination. Some potsherds have graffiti marks executed on both pre firing and post firing condition.

There is good number of potteries has yielded from the excavation of burials which includes- dish-on-stand, bowls, dishes, handi, etc are main shapes. Generally, the burial pottery is plain in nature. 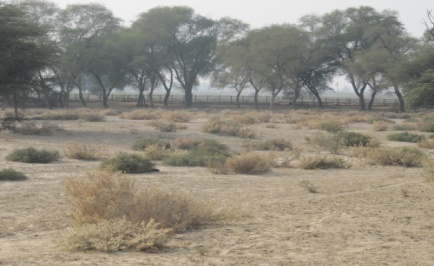 The Harappan cemetery at Kalibangan is situated about 300 meters south-west of the western mound on the present flood plain of the river Ghaggar. During the excavations three type of burials have been found.

Extended Burial:- In extended burial the position of dead is placed north-south with its head on the north. Usually these burial pits are excavated in oblong and square shape with north-south orientation.

Photograph and Drawing of Skeletal Model 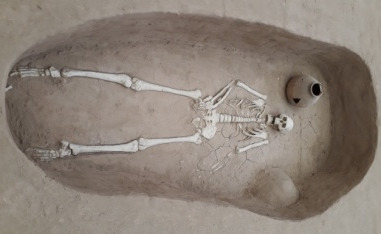 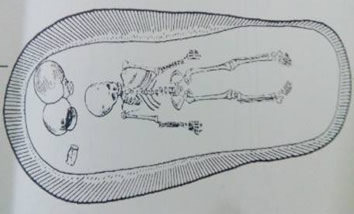 Pot Burial in Circular Pit: This type of burial practice does not contain any skeletal remains. Pottery deposit in Rectangular or Oval Pits: This third type of burial containing only pottery and other funerary objects like bangles, beads, bone points, and copper objects pot etc. which are placed in pits.